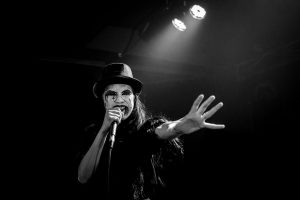 Tonight’s gig was always going to be special not only was it Halloween but it was the 15th Anniversary of The Bronx touring Australia. Unfortunately I missed Private Function but from all reports they smashed it out of the park.

High Tension recently released their third album Purge, so their set was a good mix of new tracks as well as classic tracks from Death Beat. The whole band dressed up as members from King Diamond, which was suitably apt for Halloween. As High Tension’s career has progressed they’ve only gotten heavier. Tonight’s set vocalist Karina Utomo really did seem to evoke Satan on stage. She has got one hell of a voice and the rest of the band complement her presence, especially Lauren Hammel whose drumming was like a pounding migraine that pulsated through the skulls of everyone that was present. END_OF_DOCUMENT_TOKEN_TO_BE_REPLACED