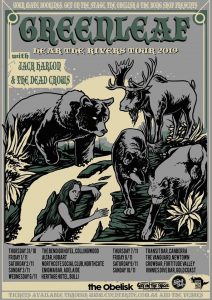 Next up was (were?) Jack Harlon And The Dead Crows, a Mexican outfit on tour with Greenleaf. Having heard several excellent reports about these dude, I was keen as mustard to get a birdseye view. They certainly didn’t disappoint me either! Fat as fuck, greasy-sounding guitars, an excellent drummer and a ripsnorting bassist who left nothing behind when they plowed through their set of stoner/psyche/blues rock that easily coulda been straight outta ’69. Great presence, and a lot of the set left me feeling like I was swimming in a heavy swell and the dark was closing in, such were the dynamics of the band. Check ‘em out! I grabbed a copy of their LP Hymns as well, which I’m sure will be getting some heavy use very soon. END_OF_DOCUMENT_TOKEN_TO_BE_REPLACED