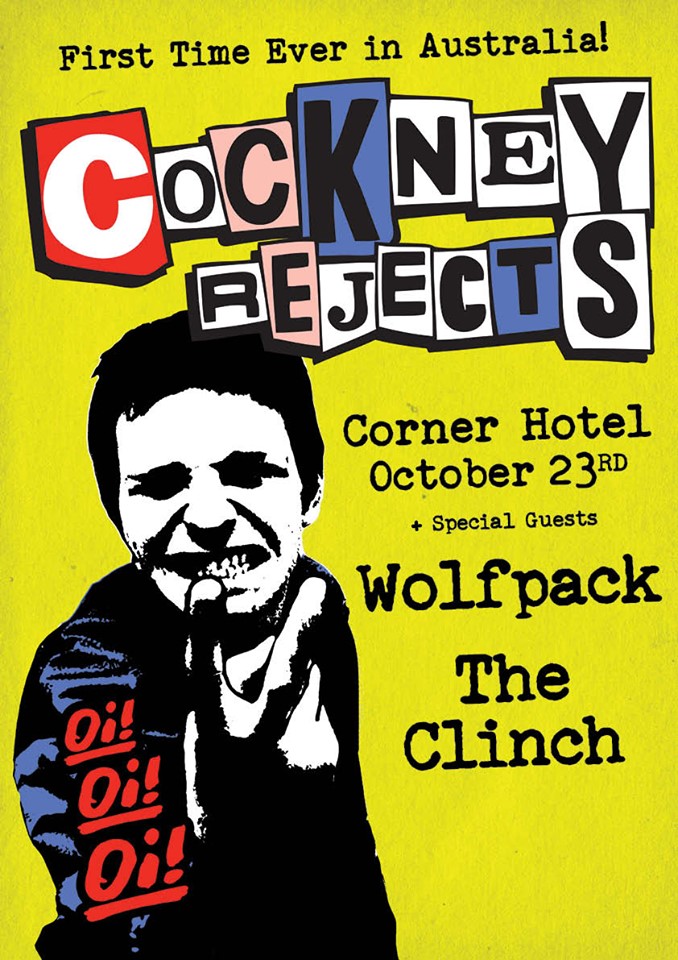 It’s only taken the Cockney Rejects 40 years to make it to our shores, and last night they definitely made up for their absence.

Local Oi punks The Clinch, knocked the crowd around for a couple of rounds, with their gang vocals and anthems such as ‘Common Goal’ and ‘Our Path As One’, they gave the crowd what they wanted.

Wolfpack are one of the few bands around that walk the walk and talk the talk, they sing about political issues and they stand up 100% for what they believe in, they are a 100% not for profit band and all their earnings go to animal charities. They have a brutal hybrid mix of metal and punk, a bit of kick one, two to the head and guts. At the end of the set I felt match fit for the main act, bounce on the toes, take off the gloves, a few deep breaths and I’m ready to go again. They finished off their set with the Judas Priest classic ‘Breaking The Law’.

The Rejects kicked off with ‘Someone Like You’, which has strong working-class themes like rejection from society, and isolation. It’s songs like this that have kept the Rejects relevant for 40 years, because they sing about the common man, and they live like common people, no pretense whatsoever.

Lead singer Jeff Geggus was full of banter throughout the night, I think his best line was (paraphrasing) when he found out Morrissey was a fan of one of their songs, he replied ‘I really wish that cunt hadn’t of said he liked our music ‘

What came across very clearly was the enthusiastic attitude, never once was there a going through the motions attitude.

The Rejects are a working-class band, so those values of integrity have stuck with them for all this time. Playing music and writing songs about what life and society means to them. I like to think that’s why other punk bands from that era still hold up too, The Clash, The Buzzcocks, because they sing about universal values, and those things never change, for the people that believe in them.

For the encore they finished with one of their biggest hits, a cover of ‘I’m Forever Blowing Bubbles’, which has also been used by the West Ham Football Club. When this kicked off it was like being at London Stadium.

The Rejects made my head throb and my heart full; this is the sole purpose of live music. Let’s hope they don’t make us wait so long for a return visit.