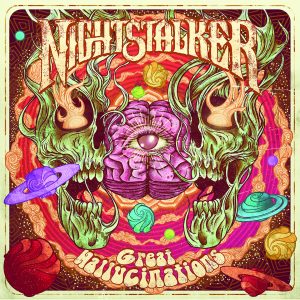 So it’s been quite a few years since I picked up Dead Rock Commando’s by Greek band Nightstalker, and subsequently purchased several more of their LP’s. So let me tell you something, when it comes to the dirty rnr thang, Nightstalker are as reliable as beer and pizza on a Friday night. Or any night for that matter. And at thirty odd years old, they are still just as dedicated to Rock Action as ever.

Some rolling feedback and a curt, martial drumbeat kicks off the opening track, ‘Black Cloud’, on Great Hallucinations. Drenched in overheated fuzztone guitar, and frontman Argy’s distinctive pipes, they quickly lay the groundwork for the hotbed of rock and roll to come, and the slow-burn of ‘Sweet Knife’ only serves to sweeten the pot. Gentle melodies eventually give way to some chunky riffing to wind the tune out.

‘Sad Side Of The City’ is a slower, slightly psyched-out track with some awesome guitar work and as with all great bands, they’re only as good as the drummer, and this point is highlighted well by Dinos Roulos’ thunderous drumming.

‘Seven Out Of Ten’ hangs on a similar vibe, with some crazy-cool indulgence in the wah to fatten the lamb before sacrifice.

Heavy stoner blues is the name of the game with ‘Cursed’. Loping, liquid bass notes drive it while the guitar licks seems to effortlessly drip from axeman Tolis’ fingers.

‘Hole In The Mirror’ starts off with some poignant and mournful guitar, and a liquid bass run, and gently picks up moment over its duration, building to a huge, distortion-laden monolithic conclusion.

The title track, ‘Great Hallucinations’ wraps this up, and gives a slight nod to early Monster Magnet to my ears. With its’ loose, jammy vibe, it’s a neat way to go out too, and the band makes full use of the time and space the song affords them.

This album is great rock’n’roll from the opening beat to the final siren, and jam-packed with excellent songs, a testament to the writing skills and playing of the band. Coming from the same era as Kyuss, Monster Magnet and a bunch of other band of similar ilk, Nightstalker have never quite had the same kinda hero-worship bestowed on them, but they have handed out a tonne of excellent albums over the years, with Great Hallucinations being no different, and don’t seem like they’re gonna call it quits any time soon. We should be thankful for this.