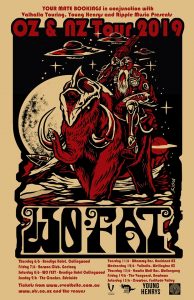 U.S. headliners Wo Fat, here on a longish jaunt around Australia as well as NZ, were next up. Been a fan of their psyche-rock stoner rock for years for years, so keen as fuck for them to start.

‘The Black Code’ is the first cab off the rank, and true to form, Wo Fat start tearing it up. Kent Stump’s guitar sound is thick and oily, heavily injected with wah, and the riffs get sprayed all over the place. Bassist Zack Busby matches him note for note with one of the most fluidly aggressive finger-picking bass styles you’re gonna encounter, and never misses a beat, even with a mid-song string bust. And just to show ‘em that ADHD ain’t a bad thing, Michael Walter beats the fuck outta his kit and provides the perfect spine to hold the whole beast together. ‘The Conjuring’ and ‘Lost Highway’ are up next and by the end, the band is really getting on a roll! They tear through ‘Smoke And Fog’ and ‘Something Sinister In The Wind’ from their most recent LP, Midnight Cometh, and they’re now fully warmed up and totally unstoppable! Lotsa great little highlights like a dual bass and guitar wah-fest, some totally manic guitar playing, and a non-stop wash of cymbals. The (tiny) vocal PA is pushed to the limits, but just gets over the line, even though it’s in a to the death cage match with the band.

After close to 90 minutes, the show wraps up with ‘Black Lotus’, and after the crowd insisted, one song before the bar staff start calling for last drinks, and I head to my car for the drive back to Sydney.

As a live unit, Wo Fat are tight as hell, and given the length of most of the songs, combined with the heavy jam element to what they do, makes them sound all the more impressive. They play off each other flawlessly, and really know how to make these songs work. The ebb and flow, and lysergic vibe of the songs works so well live, and adds a whole different slant to their LP’s. They were loud, but the combo of big amps in a small room will do that! So if you find Wo Fat are playing in your town, but you already have plans, you’re just gonna have to cancel those plans. It’s the only way!