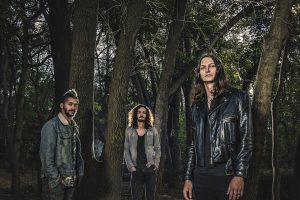 South African riff-mongers Ruff Majik have revealed the artwork for new album Tårn along with a video new single ‘Gloom & Tomb’. Having recently announced their signing to Dutch label Lay Bare Recordings for the vinyl release of the album and with a couple of European tours already lined up, 2019 is going to be a busy year for the band.

Working closely with long-time collaborator Anni Buchner on the artwork for Tårn (Norwegian for tower), guitarist/vocalist Johni Holiday explains more about the inspiration behind it all, “We chose the image of the tarot tower for this album cover because it symbolizes crisis, liberation and sudden unforeseen change. The band has been going through these motions for a few months now, and we felt it would only be fitting. We handed that over to Anni, and she turned it into magic as usual.”

“I’ve been working with the band since their first release back in 2015, and as the music has grown and developed over time, so has the art along with it in my opinion. The artwork is a new and more colourful take on the look of the classic Tower tarot card that holds a lot of significance for the band, as well as a bit of a reference to the iconic ‘Castle Grayskull’ from He-Man. Stylistically it’s also me trying out new things with gradients and textures.” adds Anni Buchner.

Johni goes on to comment on the video,” For this video, the band decided to go for a classic karaoke style sing along look, with some intense imagery in the background. Never straying too far from the psychedelic look, the video is full of eye-catching colours and dizzying sequences”

“Ruff Majik are a classic kinda power-trio, and in true power trio style, they all know their lines, and kick the tune right in the guts at just the right time whilst pushing the drive hard. Gloom And Tomb is in many ways textbook stoner, drop-tuning and drawling vocal, but grinds on with an air of menace and purpose as well. The drumbeat is like a 1000-yard stare, and the snarl of the Johni Holiday’s guitar ripped through the air. The bass has tonnes of grunt with the occasional melodic blast. Cool lyrics too. “Living is easy, if you do it like I do”, could be a quote from HST or maybe Jim Morrison, but at the same time, blurs into the tune and makes it its’ own.” El Jefe – Desert Highways.

In a small, secluded mining town in rural South Africa, three friends heard the call of the void, and spat fuzz back at it. Thus, Ruff Majik was formed, and the boys decided it was time to move to the city to spread their gospel of riff worship and sound sorcery.
Ruff Majik moved out to Pretoria, South Africa, where they’ve become infamous for their lively shows and aggressive on-stage persona. With their brand of what they call “sludge ‘n roll”, they move between slow grooves and breakneck speeds in the blink of an eye, with live shows being described as ‘whiplash inducing’.
The members are Johni Holiday (guitar/vocals), Jimmy Glass (bass guitar) and Ben Manchino (drums).

The band surfaced in 2015 with the release of their first 6 track, The Bear. This got them lots of attention from reviewers all over the world. They quickly followed up with The Fox in 2016, that got them into Classic Rock Magazine with the song ‘Sodoom and Gomorrah’ as well as 104 000 views on the YouTube stream of the full album. In 2017, Ruff Majik rounded off the animal trilogy with “The Swan”, which introduced a heavier side to their sound previously unheard but very much welcomed by fans. Swiftly, after this release, they got to work on the follow up album “Seasons”, which was released in four segments (The Hare and the Hollow, A Finch in a cherry tree, A Dragon and his hoard, The Stag in the leaves) one per season, over the stretch of a year.

Now there’s more coming your way, and it’s going to be heavier than ever before.

Ruff Majik is a power trio, a stoner juggernaut, and they bring good times with them wherever they go.

Ruff Majik’s Tårn LP is out May 3 through Lay Bare Recordings. Pre-order it now HERE.