San Diego psych heavyweights Earthless – who hit Australia and New Zealand late February – have announced the support acts for their upcoming tour, and it’s a killer bunch of groups, meaning every show is  gonna be loaded with heavy and heady psychedelic and hard rock greatness.

The tour kicks off at Max Watts in Melbourne, where close Earthless pals and local stoner kings  Seedy Jeezus (who backed Earthless guitarist Isaiah Mitchell on his 2014 Australian tour, and who have recorded an album with Isaiah under the name the Tranquonauts) are special guests. Seedy Jeezus’s “Polaris Oblique“  album came in at #7 – just one place behind Earthless’s “Black Heaven” – in the international Doomcharts.com Top 100 for 2018, so this is going to something special. Then it’s straight across to New Zealand, where up & coming Auckland heads Ounce, who are currently gearing up for the release of their forthcoming album “OZ”,  are main supports for all three NZ Shows – Friday Feb 22 at the Valhalla in Wellington,  Saturday Feb 23 at Totara St in Tauranga and Sunday Feb 24 at Galatos in Auckland. Wellington psych 3-piece Transistor are opening the Wellington and Tauranga shows.

Back in Australia, Earthless hit Wollongong Uni Bar, Tues Feb 26, with Sydney’s Grinding Eyes and locals Velvet Elevator opening. Thurs Feb 28 they’re at the Basement in Canberra with Space Carbonara, who are also one of 3 supports for Eathless’s super psych night at Sydney’s Crowbar (formerly the Bald Faced Stag) on Friday March 1, along with Grinding Eyes again and Frozen Planet…1969. Grinding Eyes travel with Earthless the short distance to Narabeen, for their Sat March 2 show at the Narabeen RSL, along with loved locals Turtle Skull,  and then Space Cabonara are back in the saddle, with Grinding Eyes again for the Sunday March 3 show at the Small Ballroom in Newcastle.

The tour finishes off out west, Sunday March 10 at the Rosemount in North Perth, with guests Datura4 featuring local legend Dom Mariani and Shiny Joe Ryan & The Sky Dolphins, a project from POND founder/mainstay/guitarist Shiny Joe Ryan. Minds and ear drums will be blown!

Complete dates with supports are as below, and tickets are available through: http://davidroywilliams.com/tours/earthless/ 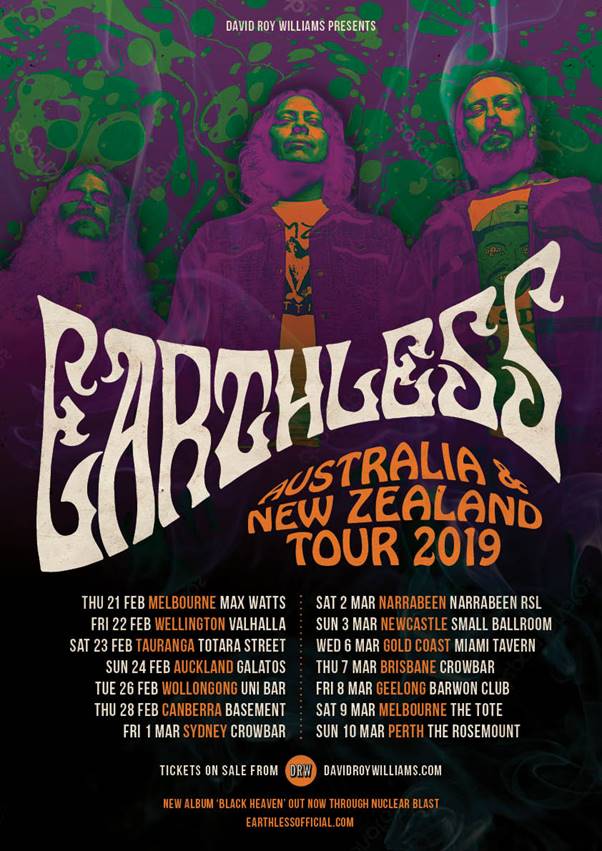