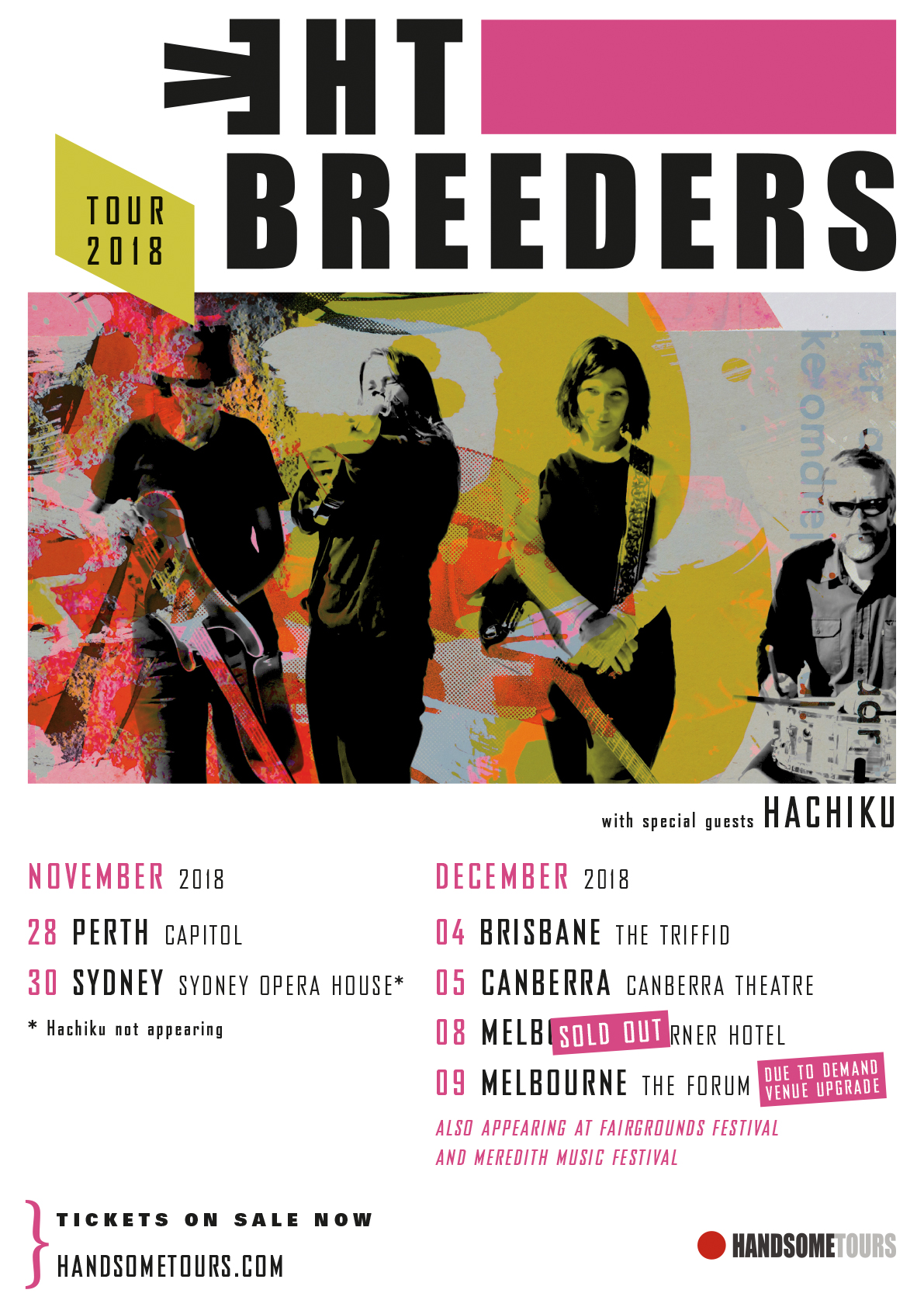 As Ostendorf played between guitar and keys, her vocals reminisced of those before like Kate Bush and Tori Amos with the band giving off a Sundays and Belly vibe. Yes, I’m using older comparisons, but after all, it was a Breeders gig. Her vibrato is stunning and the dream like quality of the songs made them feel like a pop fairytale. This was the first-time hearing Hachiku and I look forward to listening to the CD without the added chatter of eager Breeders fans at the Corner talking loudly over the top.

Feedback wailed and cheers erupted as The Breeders took to the stage. I haven’t seen them since 1994 when they toured as part of the Big Day Out and haven’t heard that much of the last few albums, so wasn’t sure what to expect. As soon as the much loved and respected twin sisters Kim and Kelley Deal walked out with their smiles filling the room, it was like sitting down with old friends and no time had passed.

The Breeders are touring their latest full length, All Nerve, which is their first in 25 years reuniting the iconic line-up of 1993’s Last Splash consisting of Kim (vocals, guitar, bass) and Kelley (guitar, vocals), Josephine Wiggs (bass, guitar vocals) and Jim Macpherson (drums).

They kicked the set off with ‘Saints’, the third single from Last Splash. A perfect start with Kelley’s well-known guitar riff. We’ve all aged since this came out, and although it felt like it took a few songs for Kim to really warm into her vocals, once she did, it didn’t feel like they’ve aged at all. There may be a little of the younger angst missing but her friendly tones and charm took you right back to the 90s where a lot of us have never left.

The poppy ‘Divine Hammer’ got some of the biggest crowd participation as they kicked into the boppier number with its upbeat catchy hooks.

‘Howl At The Summit’ saw a few special guests on stage, adding backing vocals was Courtney Barnett, Barnett’s drummer Dave Mudie (both also appear on the recording), and members of Hachiku (Anika and Jessie) with Kyle Rector on keys.

‘Bang On’, the only track played from 2008’s Mountain Battles was a stunning reminder of the power sibling’s vocals can have when doubled up and sung together. Kim and Kelley both singing “I love no one and no one loves me…”, the lyrics may be sad and lonely yet the sound was beautiful.

Of course the iconic ‘Cannonball’ was going to get some of the loudest cheers of the night and it was also cool to see Kelley 25 years on from when it was released, one of their most played tracks, still with a massive smile from ear to ear and enjoying herself, as did the entire band. Although at times Wiggs could’ve been Rick Brewster from The Angels long lost sister, feet firmly planted on the stage with a deadpan stare out into the Corner’s abyss. A highlight was ‘MetaGoth’ where Wiggs plays guitar and sings with Kim on bass. Wiggs vocals are darker and brooding, a contrast in the set yet fitting.

Then it happened… Macphersons drum count lead into Kim’s bass intro to ‘Gigantic’, a classic Pixies track that she co-wrote with Black Francis, and there was definitely “big, big love” in the room.

The set was mainly a mix of Last Splash and All Nerve, and the new tracks sit well among the classics. With standouts like ‘Wait In The Car’, and the latest single, ‘Spacewoman’, from the surface could be Last Splash outtakes yet the song writing has grown as has the band themselves. ‘Spacewoman’ particularly for me, is an instant classic and easily sits amongst their best work. 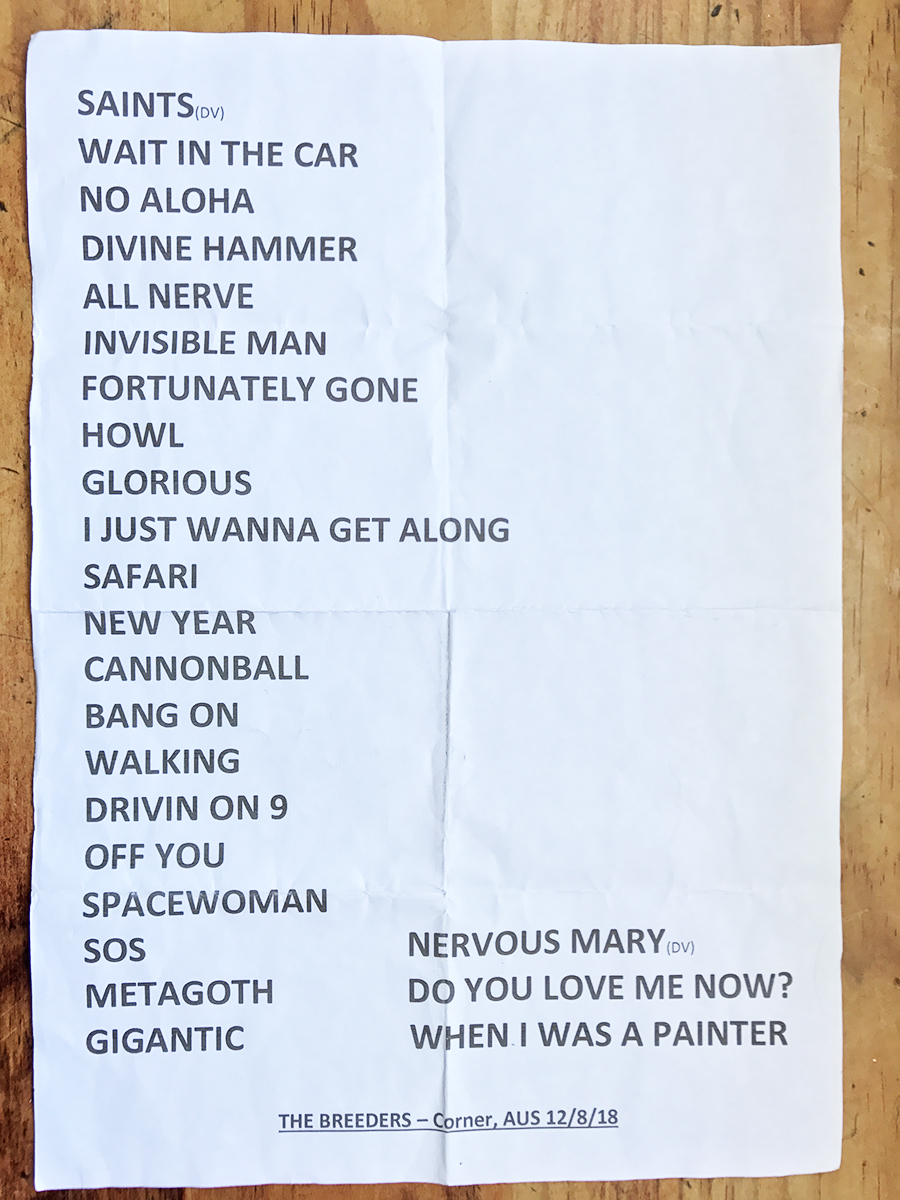