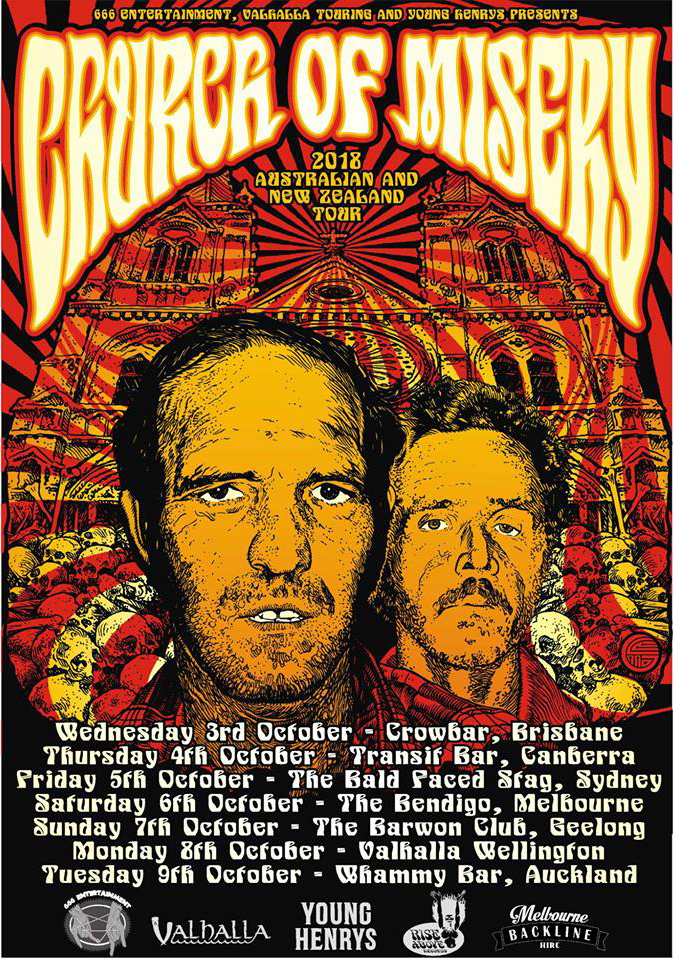 Fitting weather for a Church Of Misery show I thought to myself as I heading to the ‘Stag. Pissing rain and cold, in the early days of Spring. Yeah, that would be right!

Being fashionably late, I had well and truly missed the first couple of bands, and arrived for the last 3 songs by Dawn, with their tripped out doom. I always enjoy this band, and the self-indulgent theatrics (playing a mortar and pestle, as a mate described some of the percussion) add to the show. Heavy, sludgy and totally dedicated to the song, Dawn are really worth a look.

I stepped out briefly to grab a kebab (a necessary counterpoint to the beer that was going down so well), and missed the first couple of tunes by Sumeru. I wasn’t familiar with these dudes at all, but the tight, ripping stoner-metal was first-rate, powerful vocals, twin screaming guitars which were often syncing with each other flawlessly, and other times opposing each other with a fierce aggression. I’ll definitely check ‘em out again!

Witchskull, a bluesy, heavy doom power trio tore through a set of mostly material from their new LP. Great vocals and guitar, powerhouse Philthy Animal Taylor proud and a roaring bass complement each other perfectly.

Now for the main event. Church or Misery, with (newish) line-up, and fresh of the back of the studio only model who were responsible for And Then There Were None, the most recent and excellent COM release, but strangely didn’t seem to feature in this set. Kicking off with ‘Killafornia’ and then into ‘Born To Raise Hell’, the monstrous sounds COM were sounding great to my ears. Unfortunately, Tatsu seemed to be having some tech issues with the overfuzzed Rickenbacker he plays, which slowed the proceedings down whilst he fucked around trying to get some joy. This continued through the set, and even though they were sounding great, slowly the focus seemed to dissipate. Not the tight as fuck unit I was expecting on this night. They still ground through the songs, ‘Blood Sucking Freak’, ‘El Padrino’ etc, but were clearly struggling by the end.

And the theremin was ok at first, the joke wore thin quickly for me, one definite downside of this set.

All in all, it was a slightly disappointing set, although that said, I still enjoyed them; they just didn’t hit the highs I had heard so much about. But hey, that’s rock and roll!