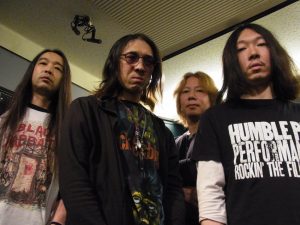 Tatsu Mikami: I am not influenced directly that much. However, many 70s heavy rock bands which became basic of our musical roots are influenced by the blues. Therefore I think that it may be said that we come under influence indirectly.

TM: I know what you say. I understand that their song was called “Murder Ballad” or “Disaster song”. But I’m not influenced by blues lyrics. I like to listen old American music than blues. Especially, pre-war country, folk, blueglass, hillbilly etc. My favorite artists are New Lost City Ramblers, Woody Guthrie and Lead Belly.

MI: The bands lyrics to such songs as ‘Spahn Ranch (Charles Manson)’ are incredibly violent and intense, what is the fascination with serial killer culture?

TM: First of all, I disgusted about typical lyrics by typical stoner band’s – “smoke weed get high” or “trip to the unknown galaxy”. Its boring to me. In the biggining of Church, I’ve been reading & watching about “serial killers”. It really fascinated – (the) process from normal guy to psychotic killers. It’s a very very interesting story. And I thought that this topic is a very (good) fit to our heavy & doomy music. That is the reason I choose this topic. And this combination is really strong & brutal. Its best for CoM.

MI: Japanese culture can be quite reserved and conservative. Has it been hard to tour and book shows In Japan considering the heavy violent graphic nature of your music?

TM: No it’s not hard. This kind of music does not have much popularity in Japan. But Church of Misery are always accepted very much by Japanese audiences.

MI: You have had extensive lineup changes over the years, what are some of the influences the different band members have brought to the group over the years?

TM: All persons who involved with CoM are not same as somebody. They all had each personality. It always makes me feel fresh.

MI: The current lineup has played a handful of shows in Europe and it will be the first time playing in Australia, considering you have such an extensive back catalogue can fans expect a wide selection of songs in the current set?

TM: Before this Australia/New Zealand tour, we’ve already done two European tours and two shows in the US this year. I already toured Australia in 2013 and other members are so excited at their 1st Australian appearance. I’m running this band for 23 years. Church of Misery has so many songs now and it (is) really difficult to choose the songs for set list of shows. On this tour we choose songs from all equally. Its like a ‘Best of CoM history’.

Check the tour dates below, don’t miss your chance to catch Church Of Misery live! It’s going to be massive!