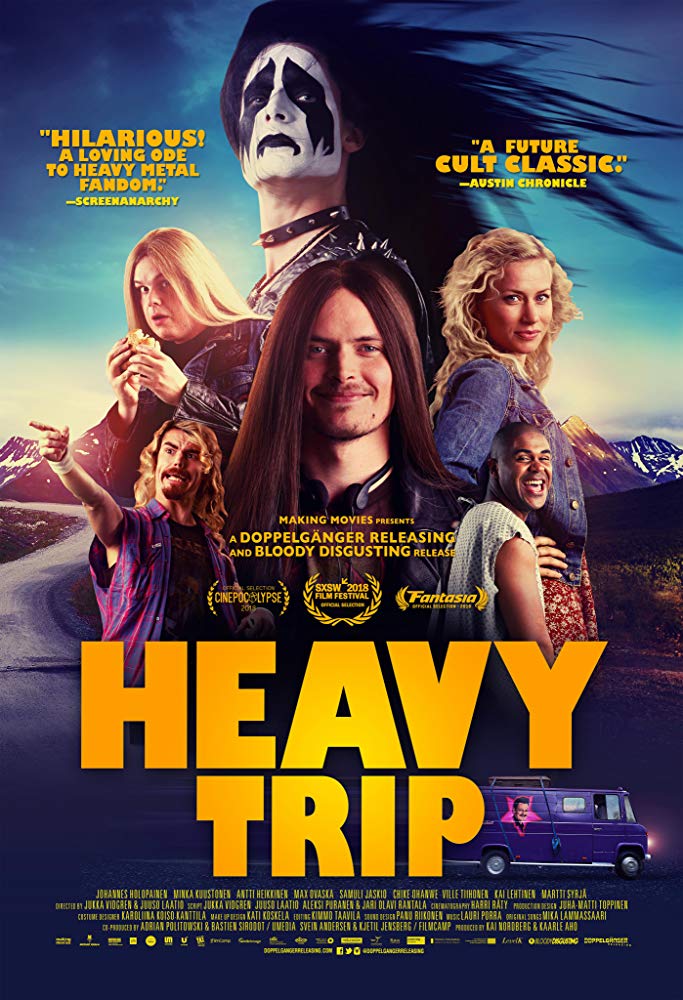 “Symphonic post-apocalyptic reindeer grinding christ abusing extreme war pagan Fennoscandian metal” – there is no denying that the aforementioned description is certainly an uncompromising and outrageous introduction, however it encapsulates a great deal of what first time writers and directors Juuso Laatio and Jukka Vidgren have crafted with their debut full-length feature ‘Heavy Trip’ (or ‘Hevi Reissu’ in the native dialect). It should also be noted that this is the “musical genre” of the band ‘Impaled Rektum’ which this film is based upon and hopefully this has revealed, to an extent, that this movie is a comedy and a bloody hilarious one on that note.

Similar to the ideal of ‘The Little Engine That Could’, except with a much more vulgar and borderline offensive script; a nameless metal cover band who are stuck in their parent’s basement after years of practicing happen upon numerous events which lead them to actually following their dream of playing their music live at a heavy music festival, ‘Inferno Metal Festival’ to be more specific, in Norway. Sound familiar? Let this writer assure you, this is no fairytale, more-so a “hairytale”. This is as authentic as a modern heavy metal fiction film can be and the efforts put forward by writers Juuso Laatio and Jukka Vidgren, as well as actors Johannes Holopainen, Antti Heikkinen, Samuli Jaski and Max Ovaska  is very accomplished.

The metal scene in Scandinavia has been culturally rich to an immeasurable effect for decades, so tackling a topic of this nature in a hilarious comic fashion is courageous to say the least. However, the legitimacy of its representation in the film is what boosts its brilliance. The sound is modern, the music well researched and the culture, although exaggerated is far from offensive. So what actually happens?

Impaled Rektum finally write an original song, it is a fast, “brutal” deathcore uppercut of a track and inspired by the sound made by a reindeer corpse grinding in the abattoir run by guitarist Lotvonen’s (Samuli Jaski) parents. They record it, then due to another happenstance, meet the promoter of ‘Inferno Metal Festival’ which goes appallingly but the band convince him to listen to their demo, then the rumours become a monster of their own. A web of lies catches the quartet in a position of having their small town now believing the four-piece are already booked on the festival and they go from “homos” to heroes. The lie is discovered, the four Finnish musicians are disgraced and the vocalist Turo (Johannes Holopainen) is mostly to blame.

But, inspired by their drummer’s (Antti Heikkinen) conviction, booking or no booking, Impaled Rektum will go to Norway. This trip is where the real “hysteria” begins, without revealing too much, the metal outfit encounters death, dangerous cliffs, car accidents, a continent-wide police manhunt and glossophobia to name a few obstacles; in actual fact though this is just the tip of Galdhøpiggen (tallest mountain in Scandinavia). It is far-fetched yet truly and extremely farcical.

There is the “all too familiar” nonsensical humour involved which cites the better days of National Lampoon and even Monty Python; frankly though, experiencing it in this context breathes fresh life into the overdone parody. Regurgitation, terrorism and even Viking culture is utilised and ridiculed to an extent, nevertheless it is done somewhat tastefully. Somehow there is even a love interest involved for Turo in florist Miia (Minka Kuustonen), who of course has the overprotective father adding extra American recognition to the comedy.

So how to summarise ‘Heavy Trip’? For this scribe, ‘Hevi Reissue’ incorporated the hilarious idiocy of The Inbetweeners, guided by the creators of Monty Python with a script overseen by the earlier dominant days of National Lampoon. Sincerely, the most impressive part is the musical validity of the feature is so genuine, it was as if Belgian’s iconic death metal band Aborted had conducted the entire project.

If Death Metal is an extreme subgenre of heavy metal music, then ‘Heavy Trip’ is the extreme European comedy of 2018; you will laugh until you growl and grimace until you headbang – horns up!