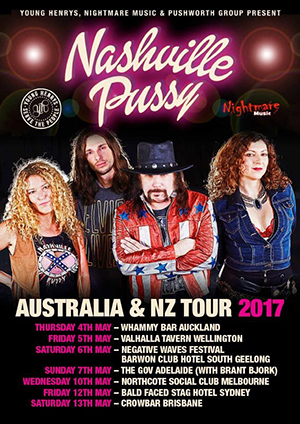 I grabbed a beer and hit the room to check out Melbourne’s Tequila Mockingbyrd. This all-girl three-piece do a great trade in ‘70s hard rock, big riffs, hair, and a fuckload of energy and enthusiasm. It was clear they were having a blast onstage. Singer / guitarist Estelle Artois plays some mean guitar, and has a great set of pipes too. Backed by a solid rhythm section, which is comprised of bass player Jess Reily (who was wielding a pretty funky silverburst T-bird too!) and drummer Josie O’Toole, they’ve got all their bases covered. Check ‘em out when you can.

The Neptune Power Federation were up next. Metal meets Cooper-style theatrics from front-woman Screaming Loz Sutch (whose vocals brought to mind Kate Bush at times) and two Explorers roaring from both left and right leave no doubt about where these guys are coming from. Some great songs, showmanship and playing all added up to an awesome show.

Rust played a rudimentary style of punk, were good at what they did, but certainly lacked any real bite or anarchic angst that could of set their performance off. After 4-5 songs, I retired to the front bar, caught half a set by a band whose name I didn’t catch, but displayed ten times the raw punk subversive attack that was so lacking in Rust. Good fun too.

Now it was time for Nashville Pussy to launch! Their ‘Motorhead meets redneck rock’ is always a rockin’ ride. Guitarist Ruyter Suys was a lot more subdued on stage compared with the previous shows I’d seen, albeit 10 years earlier. Could be age catching up, but she still plays like a motherfucker. Blaine Cartwright packs a wallop with his gravel and whiskey pipes, and does a good job keeping the crowd amused too. They opened with ‘Everybody’s Fault’, ‘Piece Of Arse’ and ‘Pillbilly’, all balls out and heavy on the riffs. Copious amounts of Jack washed down the rock, guzzled straight from the bottle too. ‘Hate and Whiskey’ and ‘Rub It To Death’, one of the NP trademark play on words song titles soon follow, both blazing with distortion-filled mayhem. Bassist Bonnie Buitrago, pumps out some beefy bass lines and meshes nicely with Jeremy Thompson’s pummel. They plowed on with ‘Heart Attack’, and a few others, but you don’t get a whole lot of light and shade with this unit, just flat-out rock’n’roll! They wrapped the set with ‘Go Motherfucker Go’, the only tune played from their debut Let Them Eat Pussy and then it was all over ‘cept for the ringing in my ears! Yeah, they were pretty entertaining all round, and a great start to the weekend!