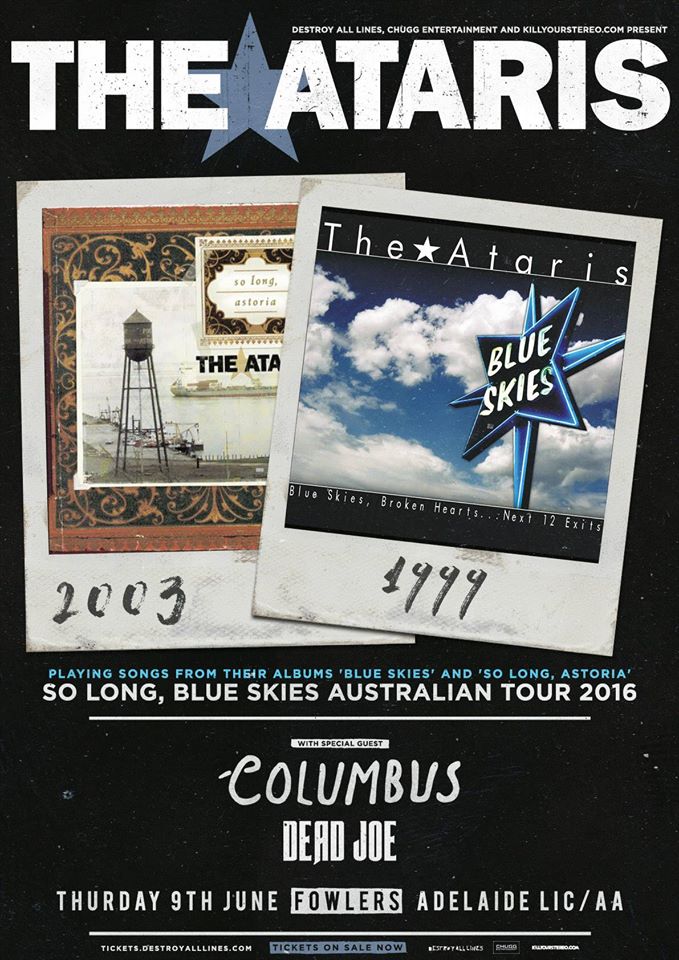 Local goth-punk trio Dead Joe were called upon to open this event and unfortunately the detriment of an early time-slot equated to only 15 observers being present for their performance. It’s of no surprise or mystery that Dead Joe really like The Misfits, excessively as a matter of fact; this adoration blatantly shines throughout the three-piece’s tracks. Showcasing songs from their LP Carry Me Home which is basically a collection of all songs the band have released in their history; the show was polite but not particularly inspiring (understandably due to low crowd numbers). The addition of Mikey Valentine as a new member is a nice touch though.

Recent UNFD signees Brisbane’s Columbus had the honour of main support for this tour and these young men quickly proved that they have the songwriting chops to earn such an opportunity. Channeling the sadly now defunct excellent alternative punk band The Swellers at times, the trio are able to combine a gruff hard hitting punk recipe with just enough pop melody to engage the listener entirely. Their songwriting is of a maturity which bands are at times unable to achieve; their live show however, needs refinement. Although their beautifully awkward stage swagger was charming, it evoked a slight inelegance. ‘Toss & Turn’ and ‘Downsides Of Being Honest’ were highlights especially with the growing audience (which woefully was still somewhat minute), but it was the tracks from the three-piece’s recently recorded debut album which enchanted Adelaide. Keep an eye and ear out for Columbus; surely this is just the beginning to a very promising future.

The first words that Kristopher Roe announced to Adelaide when he climbed onto the stage was that he was regrettably suffering from bronchitis; but not one to dampen spirits he admitted quickly it wasn’t going to stop him and he was just going to require louder sing-alongs from South Australia. This scribe is delighted to admit that almost every attendee was very happy to oblige. Credit to Mr. Roe, as the sole remaining original member of The Ataris, he has kept his punk rock dream alive amongst all the turmoil he has experienced as a person and a musician. Those struggles were ready to be tossed to the side as it was time to celebrate the outfit’s most prestigious records Blue Skies, Broken Hearts...Next 12 Exits and So Long, Astoria. To start: ‘In This Diary’ and while Kris and his four other merry men excitedly pranced around the Fowlers stage, Adelaide belted out their favourite verses and choruses in joyous harmony. ‘Unopened Letter To The World’, a country driven take on ‘The Hero Dies In This One’, ‘Takeoffs And Landings’, ‘Boxcar’, the beloved ‘San Dimas High School Football Rules’, ‘The Saddest Song’, the amazing ‘Boys Of Summer’ cover, ‘Summer ‘79’, ‘Looking Back On Today’ and ‘Eight Of Nine’ made up the set-list which was a superb joint sing-along party and exceptionally charming considering the circumstances.

Rather astonishingly an encore was undertaken with Mr. Roe playing an acoustic ballad he wrote to his new fiancée entitled ‘Hardest Goodbyes’ and then to close ‘I Won’t Spend Another Night Alone’. It may have been far from perfect, but with a timeless arsenal of songs that demand this level of adoration worldwide and have for well over a decade, perfection is a dream which requires no reality, especially in punk rock. So when can the world hear that sixth full-length record Kristopher Lee Roe?